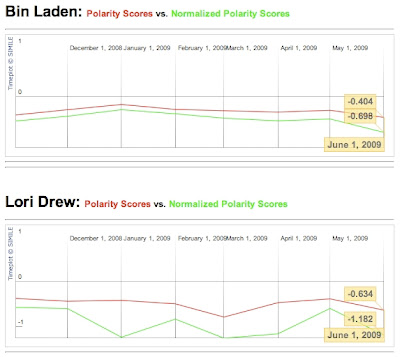 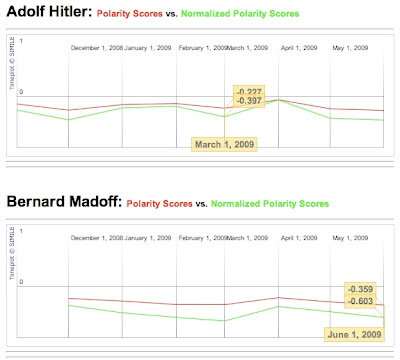 A certain fascination exists with identifying the public figure with the lowest overall sentiment ranking. It tells us something about a given society to discover who the most demonized figure is, the person spoken about with the greatest anger or rancor.

Although our system does not make it easy to extract people by negative sentiment, any active news reader should be able to construct a rogue gallery of evil and destructive people -- like mass murders Adolf Hitler and Osama bin Laden, or the swindler Bernard Madoff. But as shown by these sentiment polarity charts, all their reported vileness pales next to Lori Drew.

Who is Lori Drew? She is a mother whose cyber-bullying drove a fragile 13-year old girl (a rival of her daughter) to suicide, through messages sent from a fake MySpace profile. The public outrage over this pushes many buttons -- from the general hatred of bullying defenseless children, public attitudes against overzealous parenting, fear of social network sites, and more. As of this writing the judge is trying to appropriately sentence her, a task complicated by the fact that she has not been convicted of anything stronger than violating the MySpace terms of service.

Now don't get me wrong. She is clearly guilty of such horrifying behavior that it is difficult to see how she can live with herself. But it is obviously an overreaction to mention her in the company of Hitler and Bin Laden.

Realize that sentiment analysis aims at capturing what the world is thinking, not what it necessarily should be thinking or that which is objectively true. Lydia sentiment signals measure interesting social and cultural phenomena, but their proper interpretation requires an understanding of context and the nature of the underlying news sources.
Posted by Steven Skiena at 8:04 PM